Yes, it has been over a week since the last post…unpacking is exhausting.

Last Friday, the dining room table arrived. It will be August before the chairs show up.  I consider it real progress to finally have a table. We went with the largest option, it also has a leaf that expands it to about 8 feet. 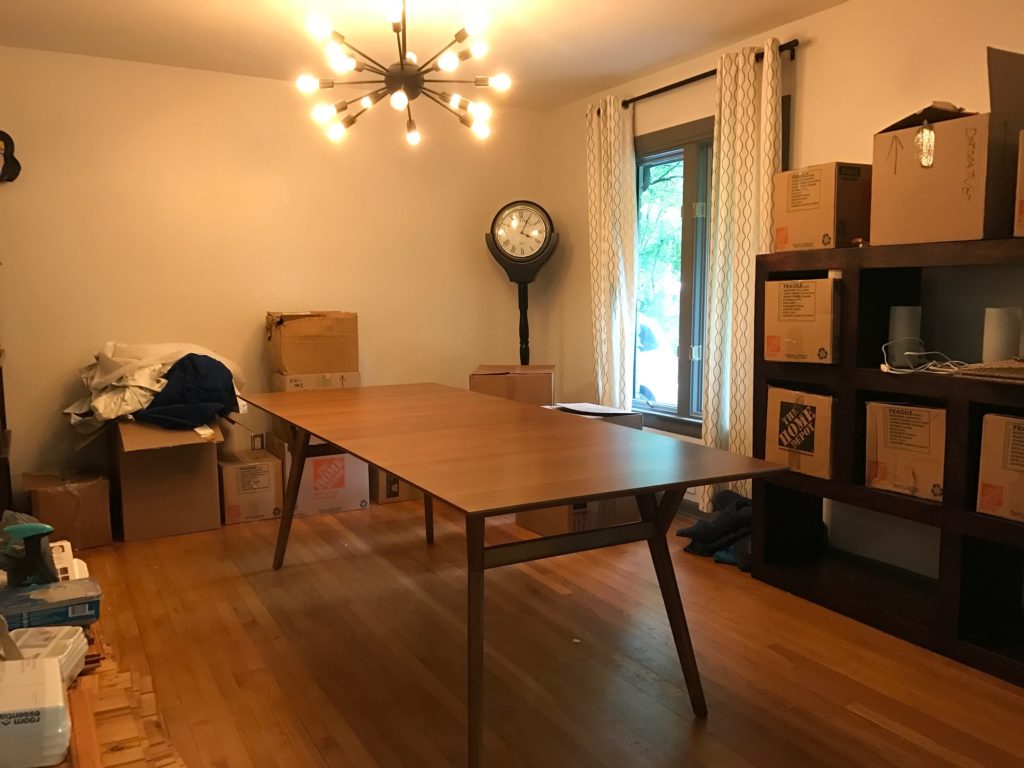 Saturday was all about errands. We borrowed a truck and loaded it up with mulch to go under the fort. We made a stop to buy a wheelbarrow and found a strawberry jar birdbath perfect for the backyard. 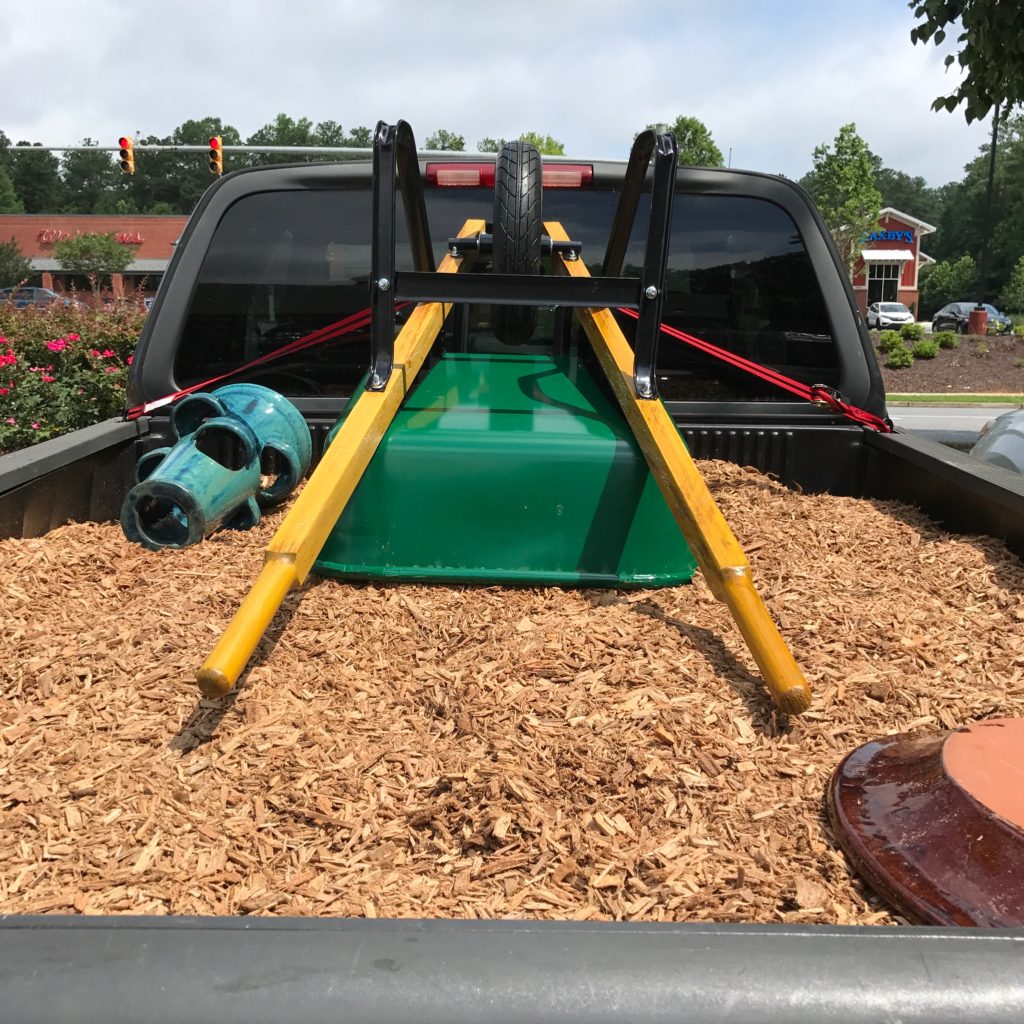 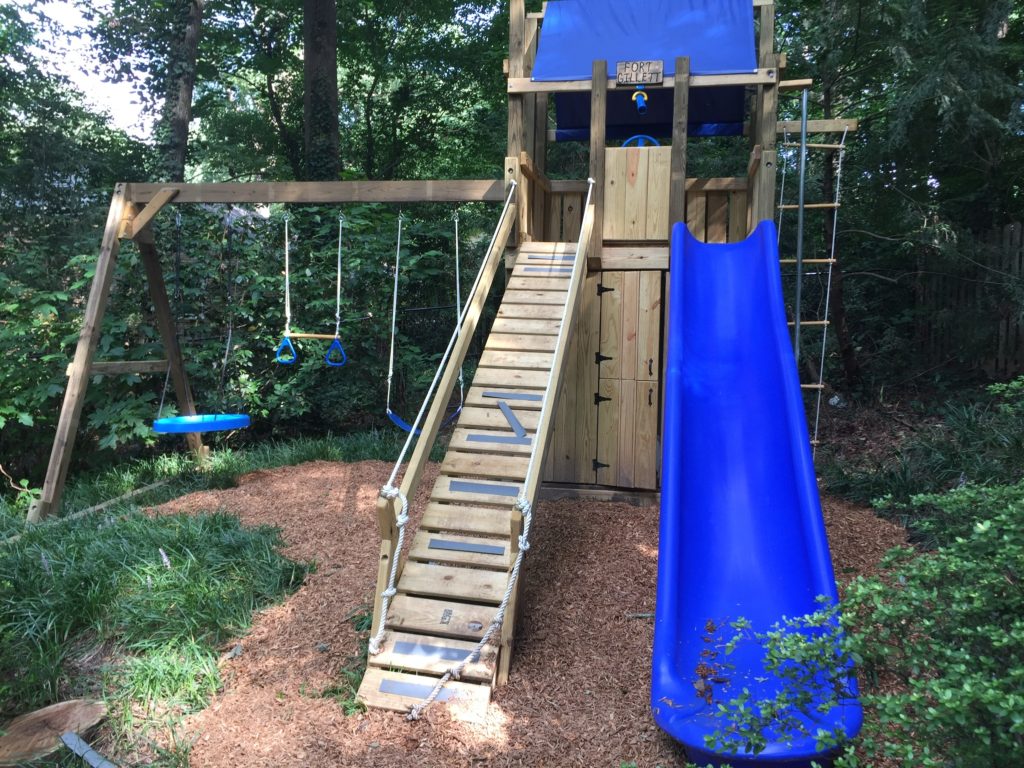 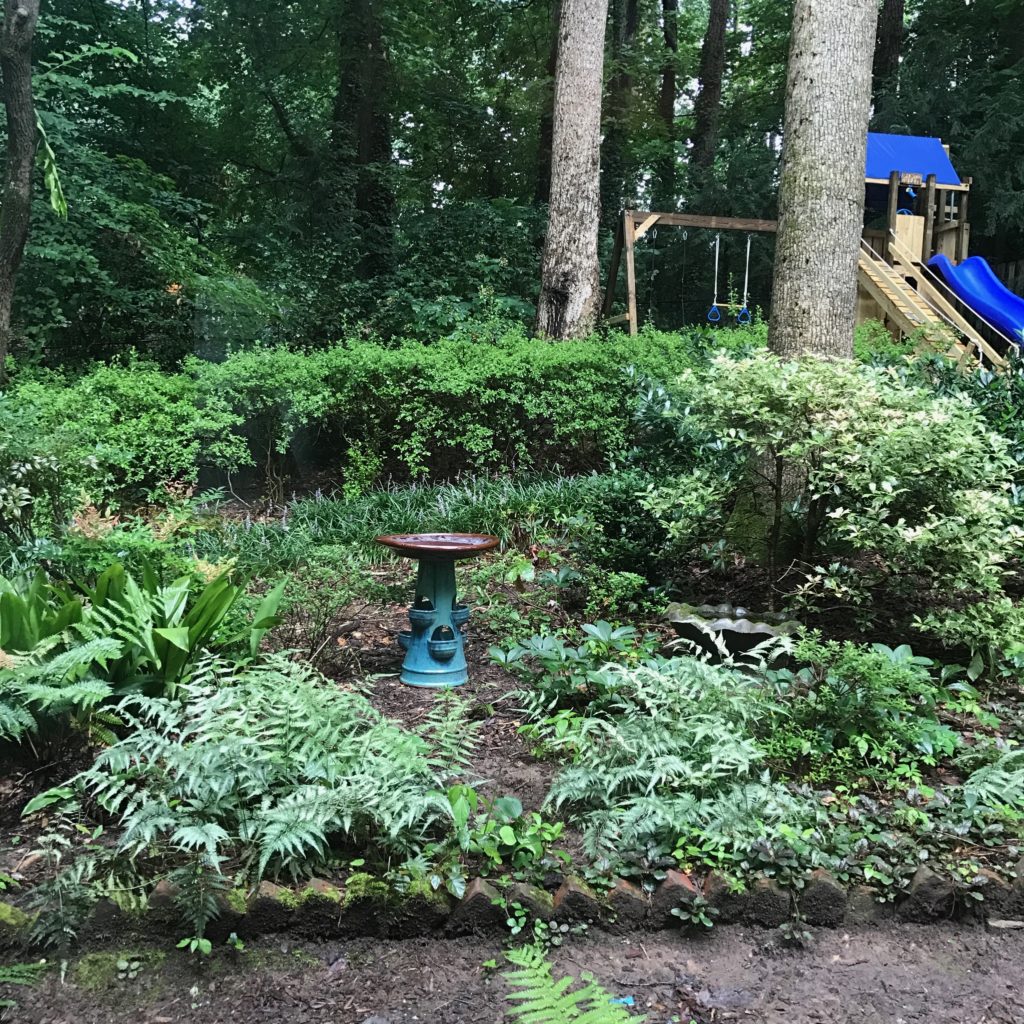 Sunday was another run to Tiny House to pickup more odds and ends… like all the freaking pots and pans that we managed to forget during the move shenanigans.

We had to replace the 19-year old microwave previously mounted over the range. It was not a good time to install the new one. It ranked an 8 or 9 (right around assembling IKEA furniture) on the test your marriage communication skills scale.

We had grown accustomed to the empty space above the range proudly displaying an old-school laminate wall covering, but it will not be missed. 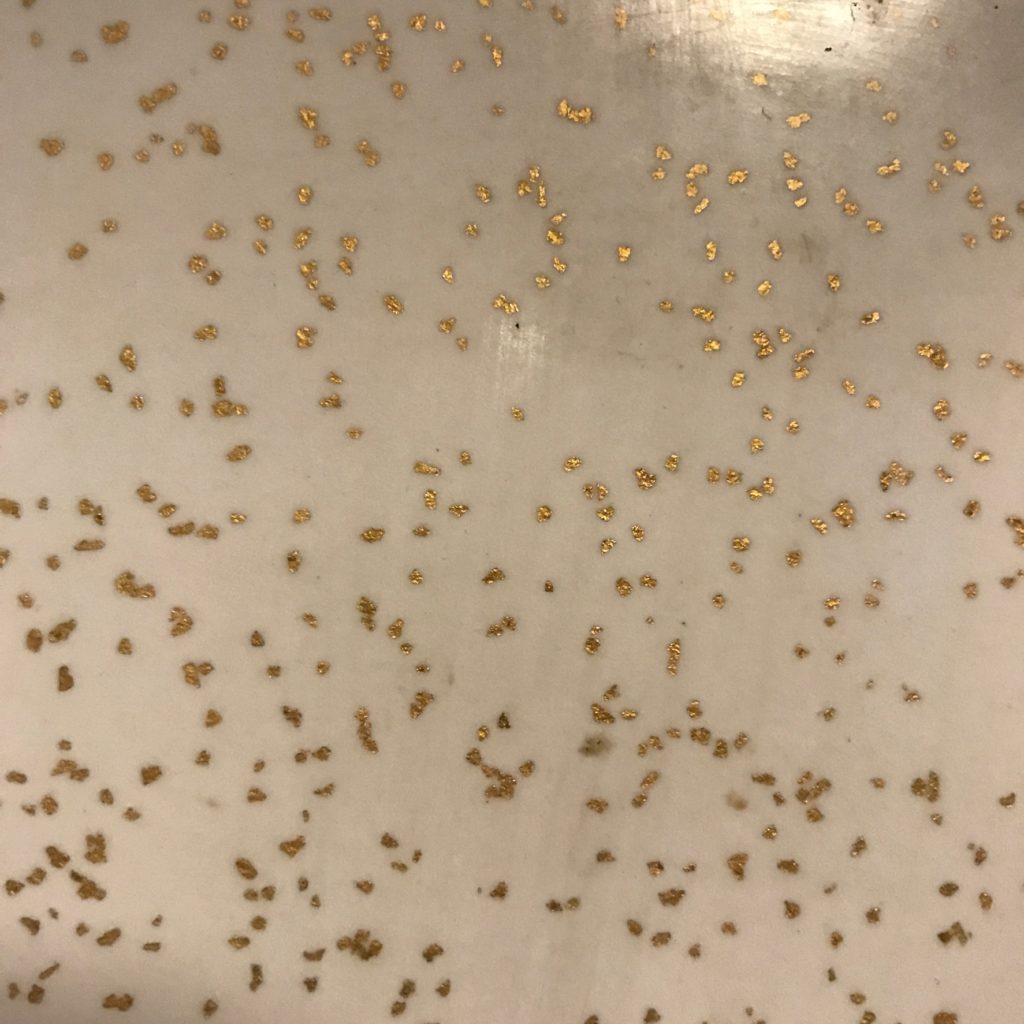 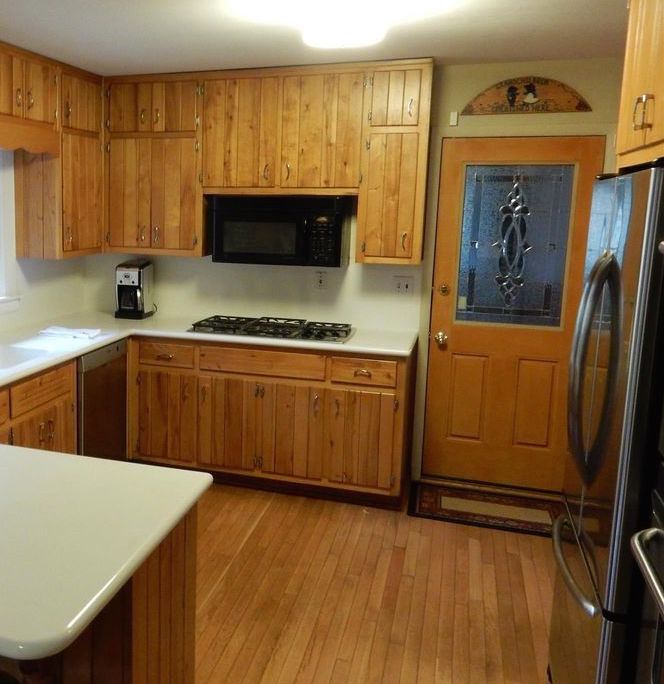 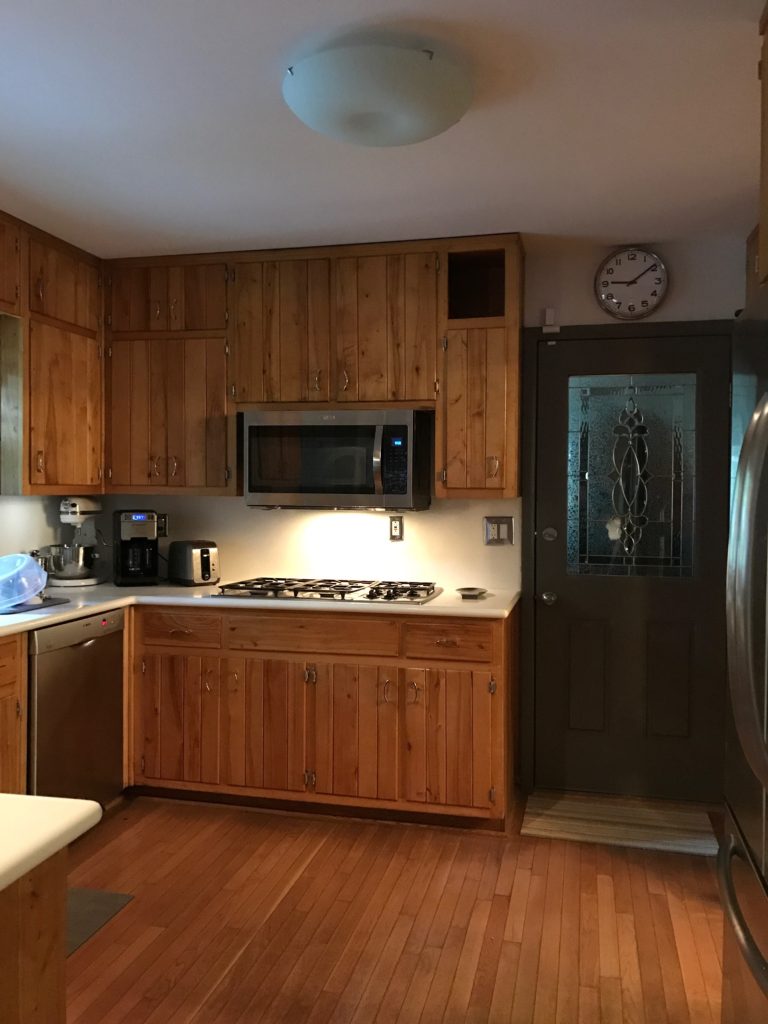 We got the new grill assembled over the weekend, just in time for the 4th. The grill was a score on a great pre-memorial day sale. It’s been in a box in the kitchen for two months and it is lovely to see it in its rightful spot. 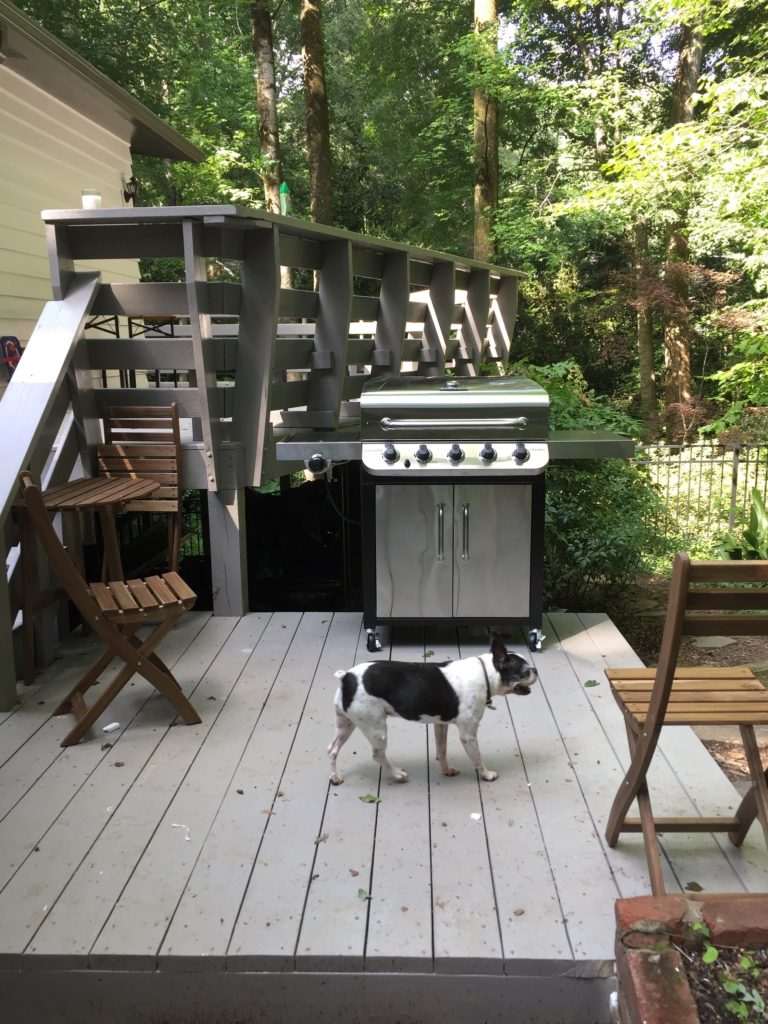 Monday was a bonus weekend day. We had the day off, but school was open. We spent this time shopping without children. It’s like a vacation.

We celebrated the 4th properly, husband walked the Peachtree, and we had steaks on the grill to celebrate the 28-year-old’s birthday.

I took the rest of the week off to make a dent in the unpacking and organizing. I should have taken a month off.

There were multiple Target / hardware store errands. Sidebar, why are people such assholes? The cart thing is just ridiculous. I fixed it, while cursing in the 90-degree heat. 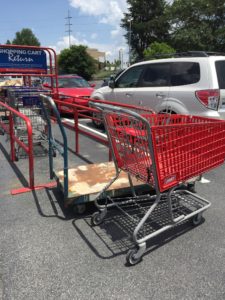 This guy, with the illegal left-hand turn that took forever, world-class asshole. 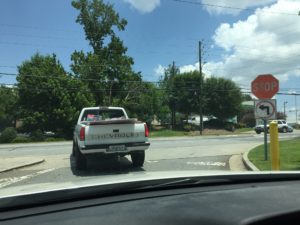 I finally located the unicorn lightbulb (along with 7 of its friends) after multiple trips to multiple hardware stores. 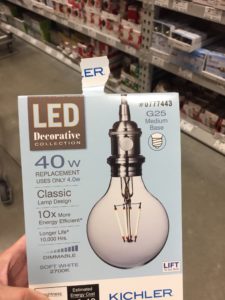 We have those old Hollywood-style lights over the mirror in the master bath. The fixture will eventually be replaced. In the meantime, the  heat given off by 8 incandescent bulbs is spectacular and must be stopped. LED was pricey, but necessary. I also like the way they look. 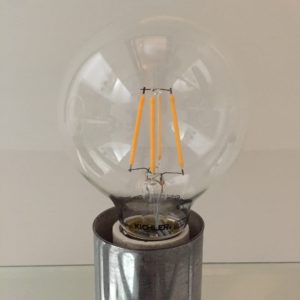 There were many mats to be purchased for many doors. Hardwood floors are lovely, but the dirt tracking through the entire house during pre-move was driving me crazy. 6 doors, 12 mats later… 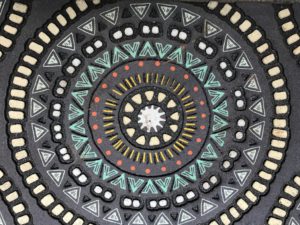 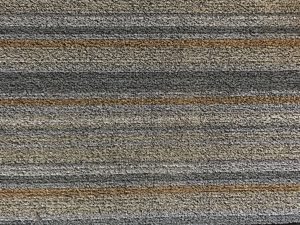 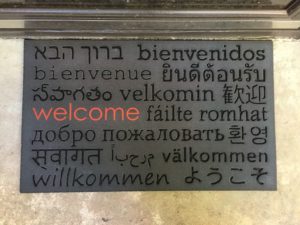 There’s been a lot of rearranging and figuring out the furniture layout. I have no trouble hitting my daily step goals without leaving the house.

These former side-tables now make a lovely console table behind the sofa. 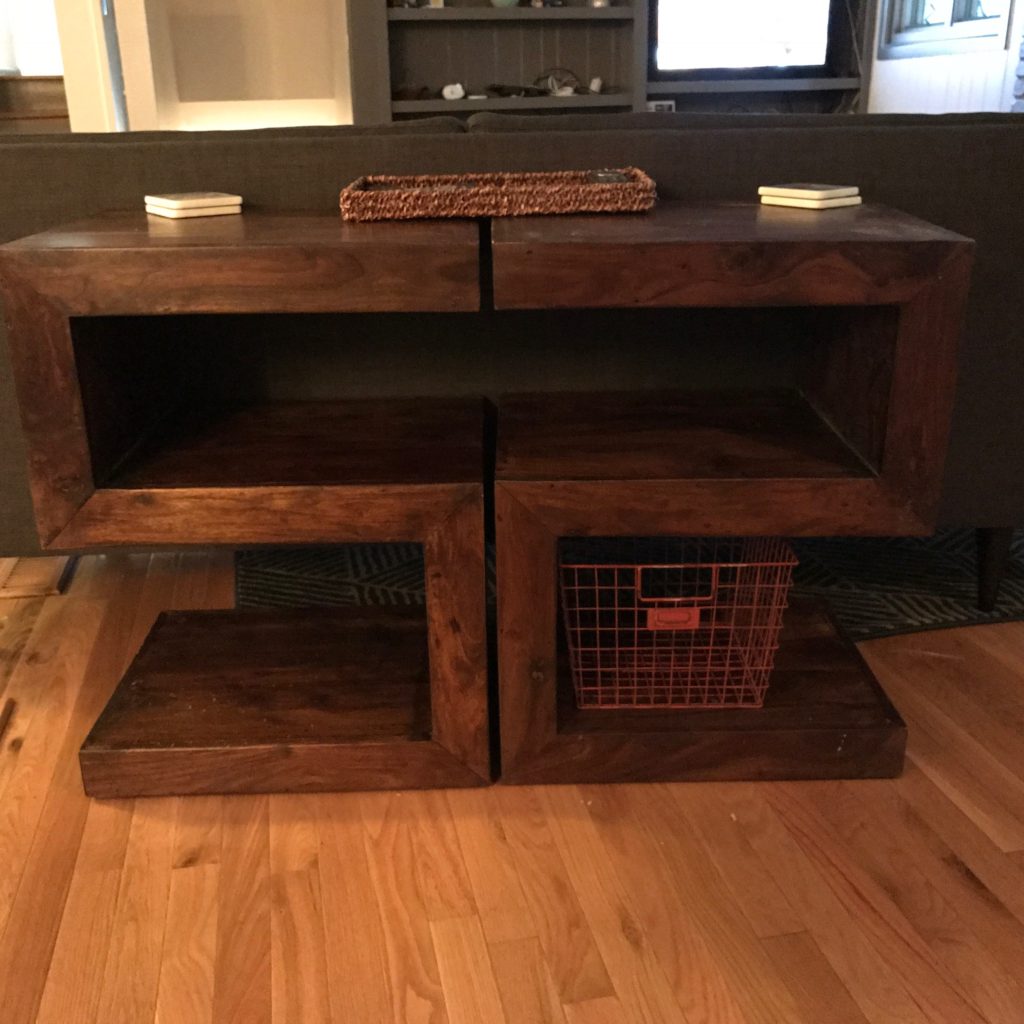 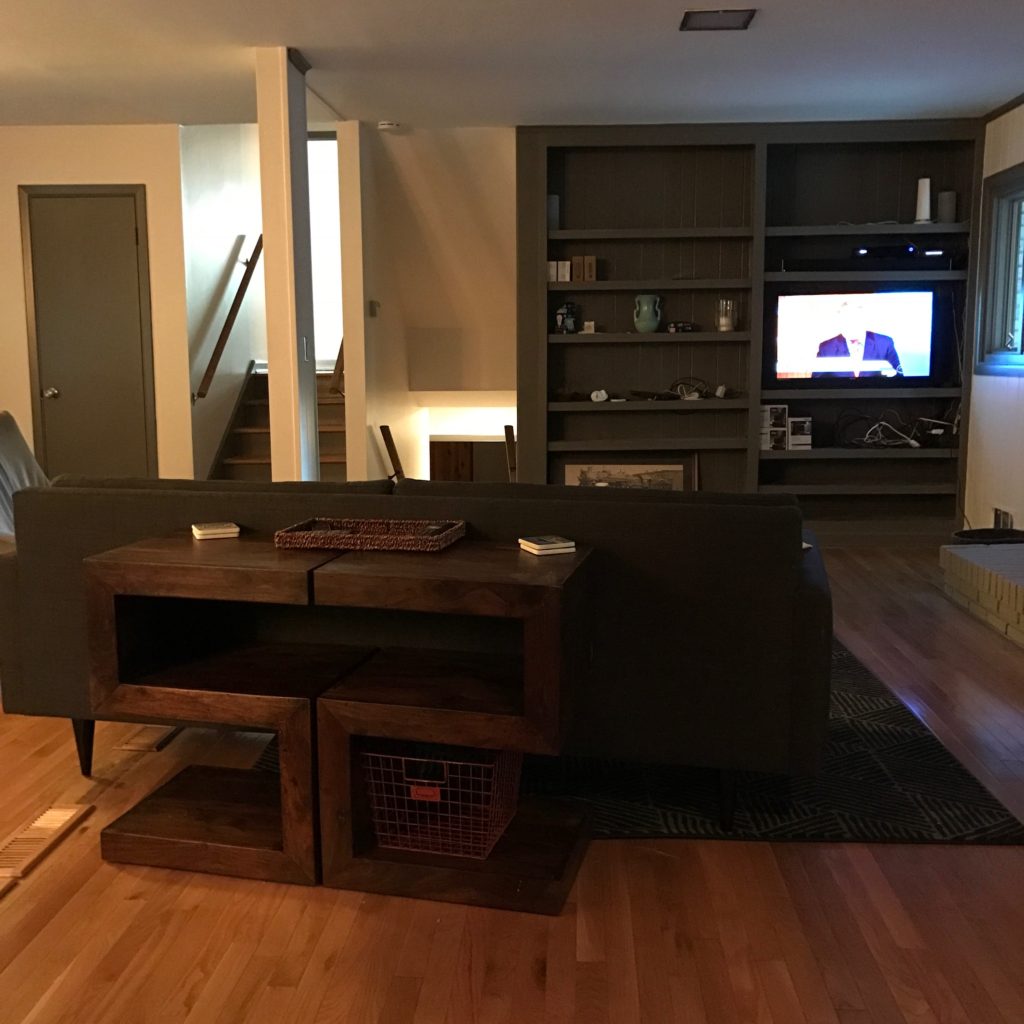 The living room, as of this morning, is starting to come together. Jack is slowly learning the rule about not getting on the furniture. These are low-light photos.It was early and I don’t do bright. 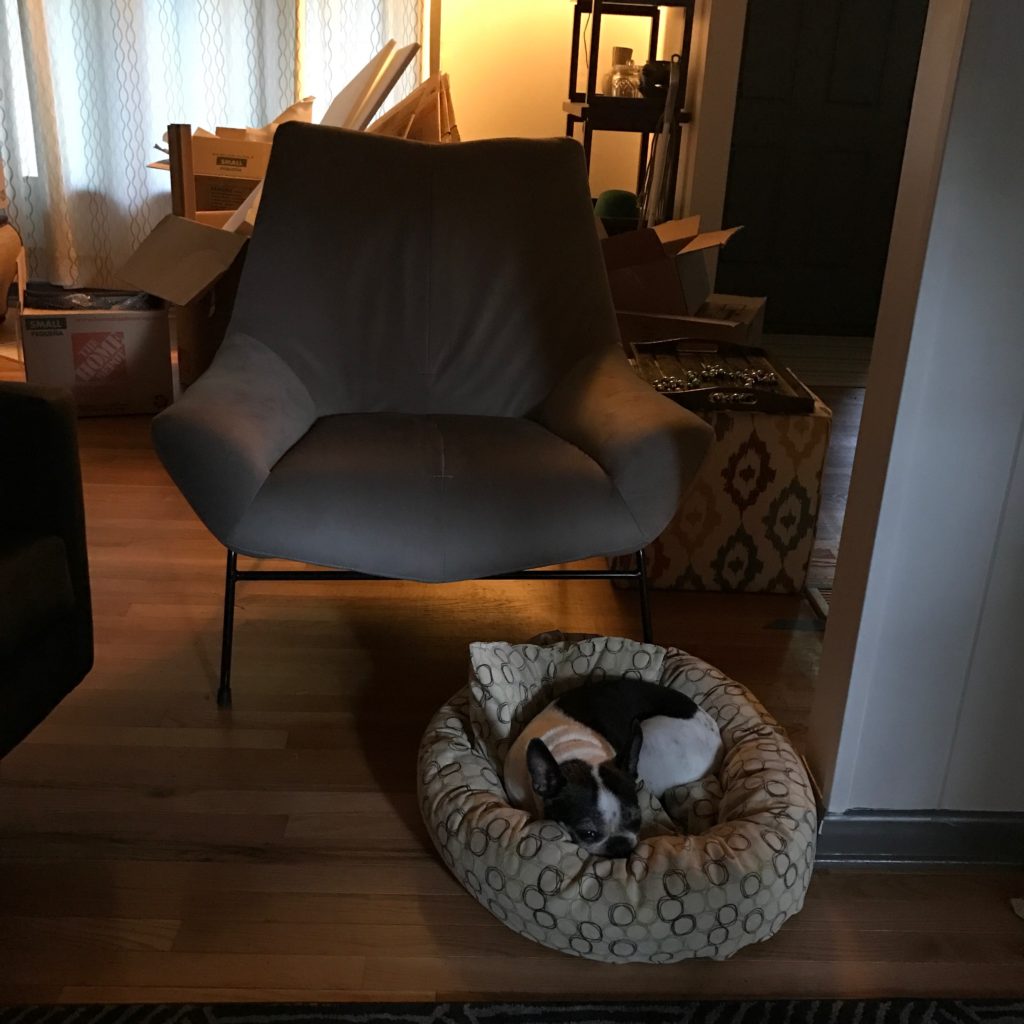 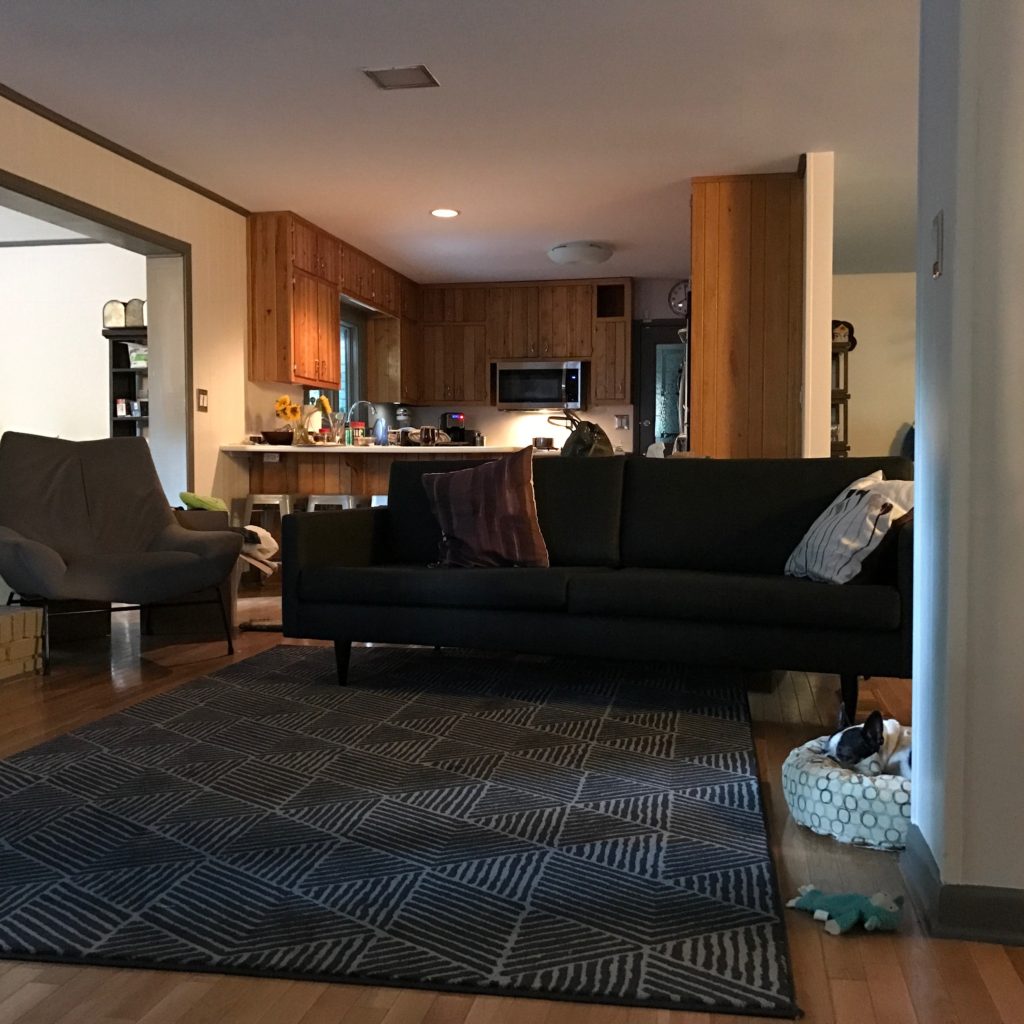 The state of my office / knitting center is a bit overwhelming. That’s a project that will have to wait. Notice the big 4? This was my genius system for directing the movers to different rooms during the two moves. 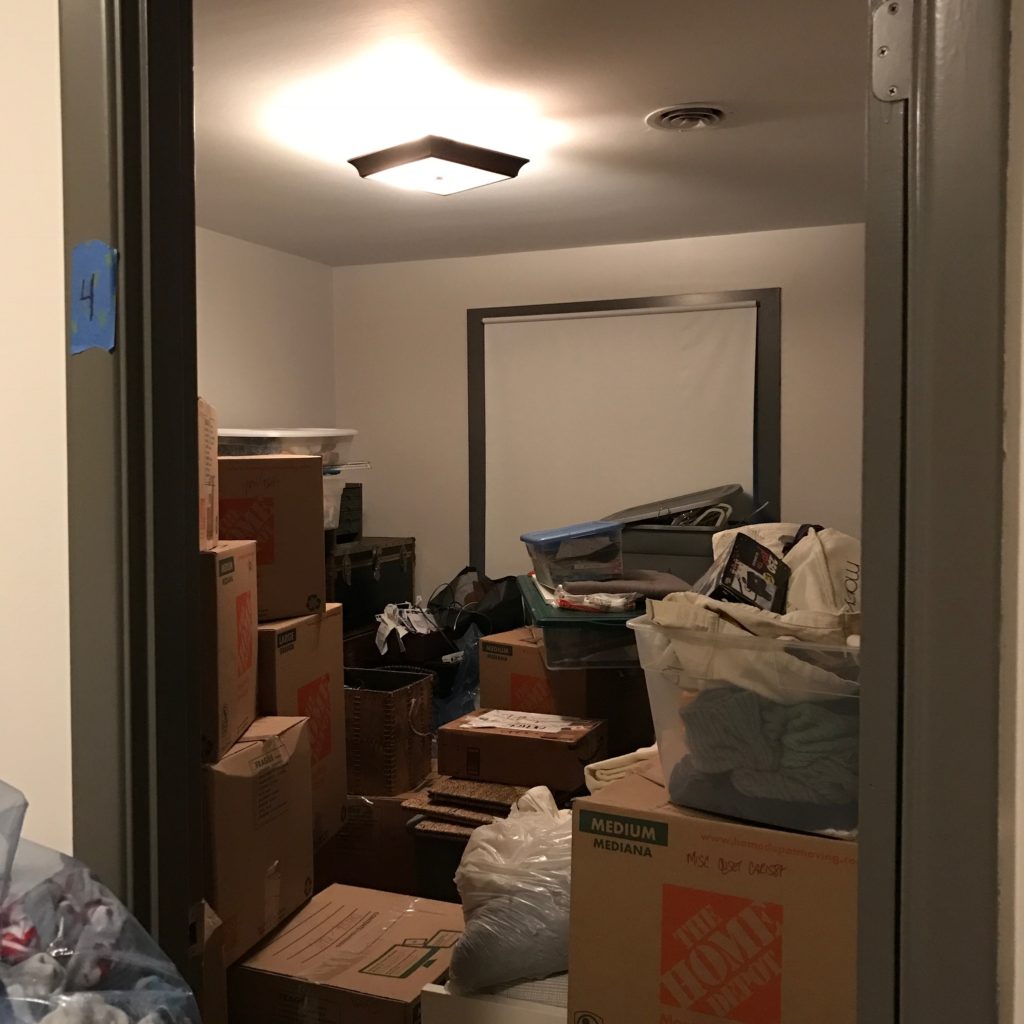 The family room is still a mess, but things are looking up now that we have located the power cord to the giant TV. 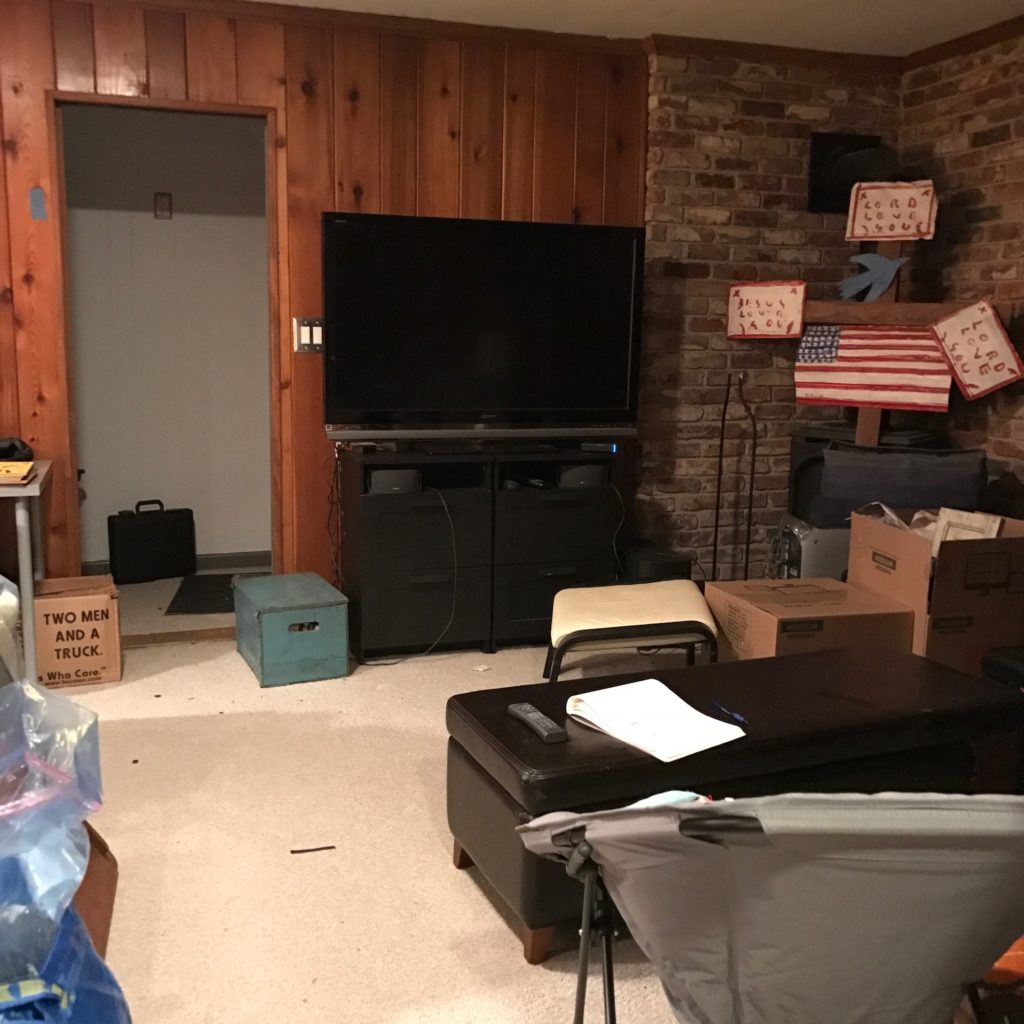 We discovered this guy under a shelf that was left by the previous owners. Looks like a toy I would have loved. I went through the requisite horse-obsession phase. 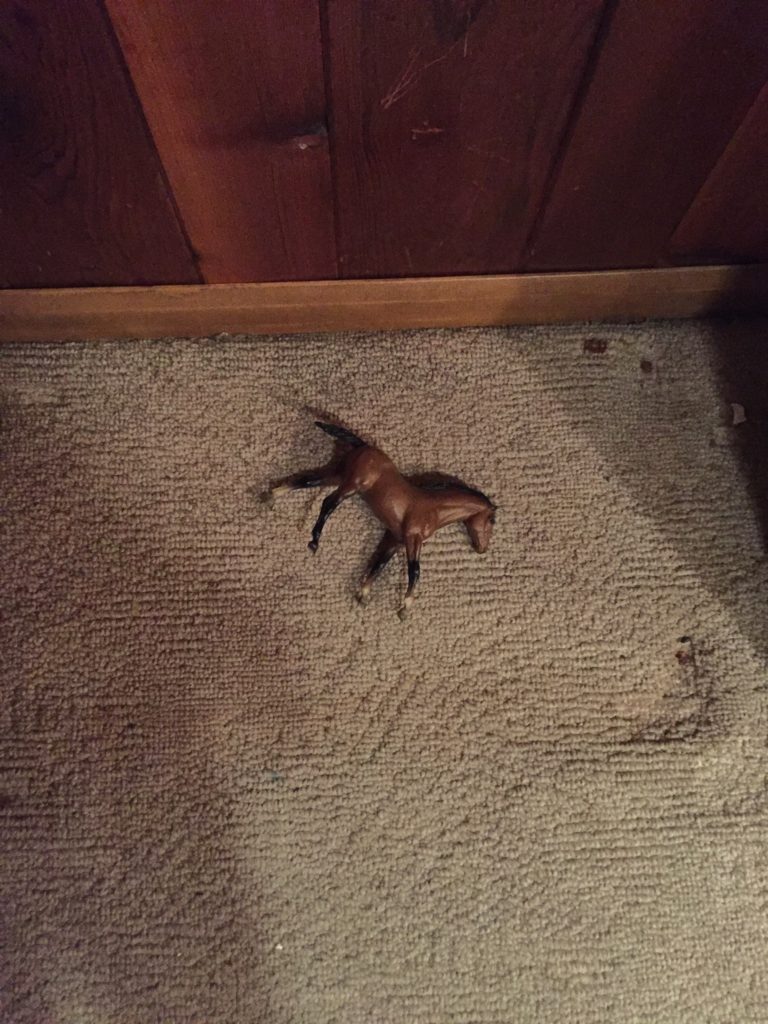 This is a consistent image throughout the day. He’s helping the neighborhood watch.

These little clips bring me joy. 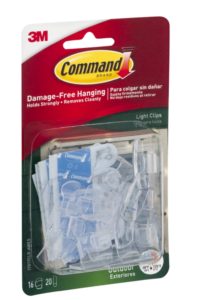 I use them to wrangle the many cords into place. Especially the irritating iPhone charger cords that slither off the night table the minute you unplug them from the phone. 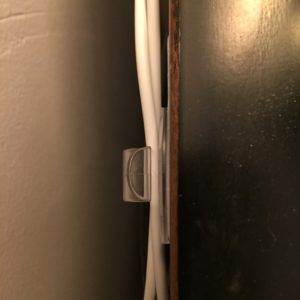 I know that phones next to the bed are not good for sleep, I do not care. When do you think these posts usually get written?

The new rug for the dining room also brings me joy. 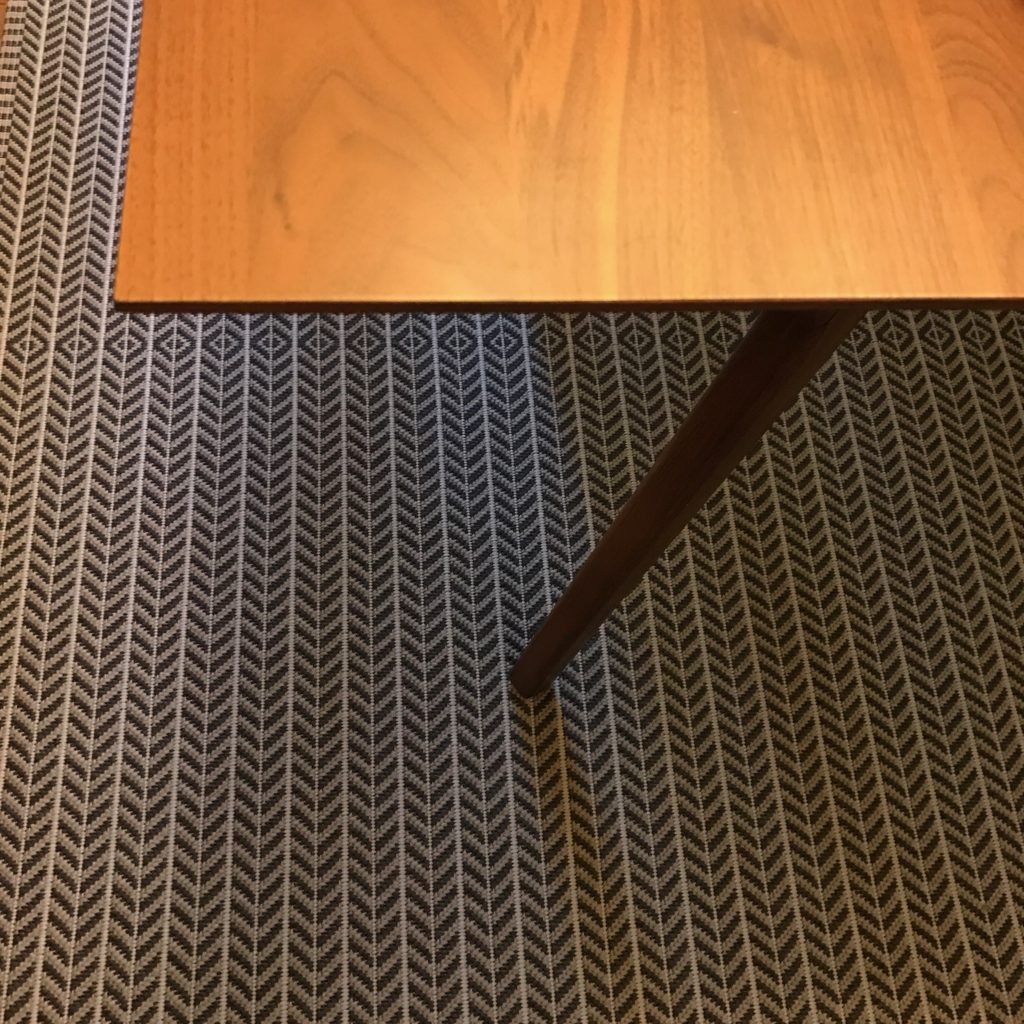 I’ll leave you with this lovely photo. The morning view from our deck, right outside of the master bedroom earlier this week. 💙 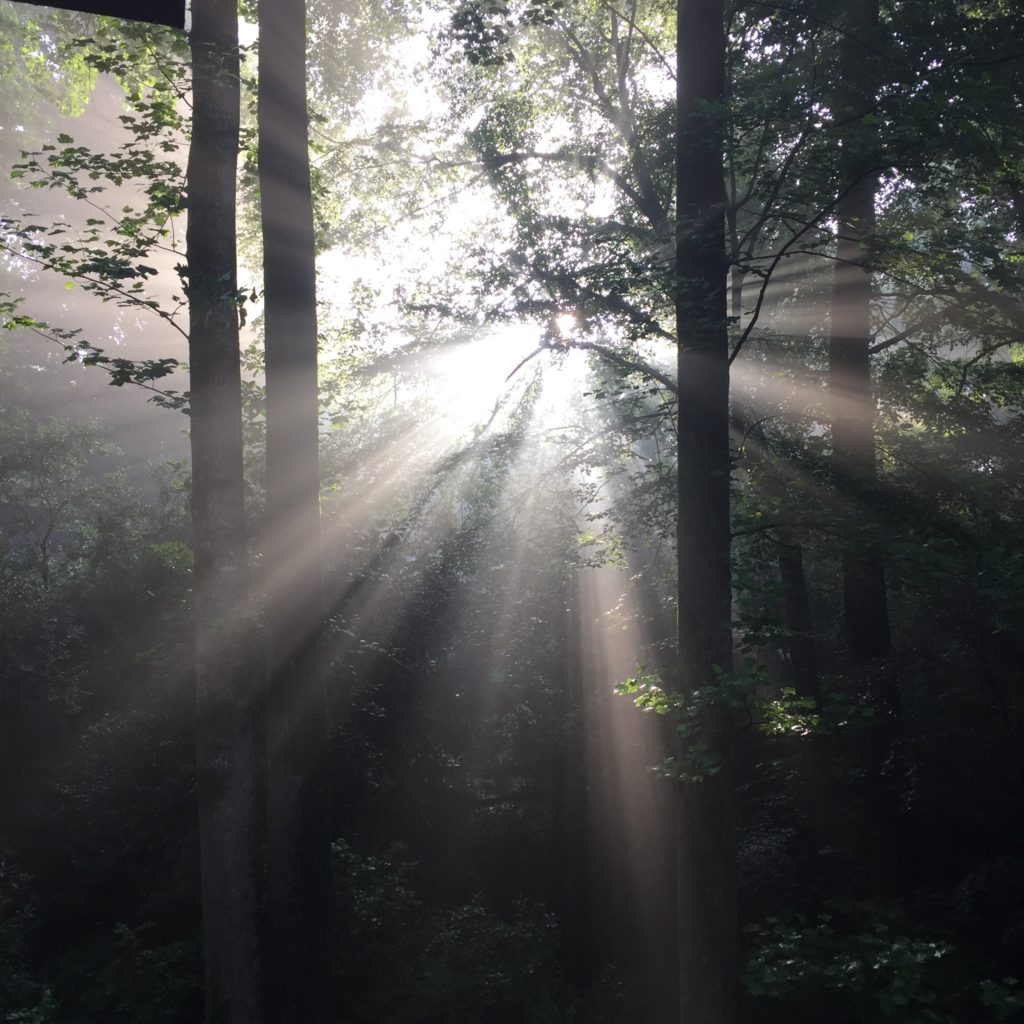